Eurasian watermilfoil (Myriophyllum spicatum) is an attractive plant with feathery underwater foliage. It was once commonly sold as an aquarium plant. Eurasian watermilfoil, hereafter called milfoil, originates from Europe and Asia, but was introduced to North America many years ago and is now found over much of the United States. Milfoil spreads quickly, and can rapidly overtake an entire lake, effectively replacing native plant species. 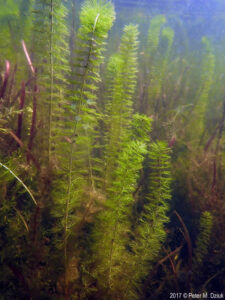 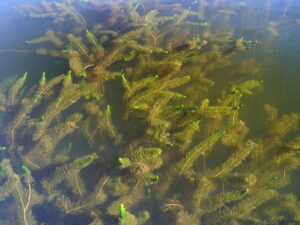 This plant was introduced to the eastern United States at least as long ago as the 1940s, but it may have arrived as early as the late 1800s. The first known herbarium specimen of milfoil in Washington was collected from Lake Meridian near Seattle in 1965. By the mid 1970s it was also found in Lake Washington. During this same time period milfoil became established in central British Columbia and traveled downstream to Lake Osoyoos and the Okanogan River in central Washington. Now milfoil is found in the Columbia, Okanogan, Snake, and Pend Oreille Rivers and in many nearby lakes. In western Washington, the distribution of milfoil closely follows the Interstate 5 corridor. It is very apparent that milfoil has been spread from lake to lake on boat trailers.  Read More…  (Taken from the State of Washington Ecology website)

In 2008 Lake Morey saw the completion of three years of treatment to mitigate milfoil.  By all accounts the treatment was a success at the time. Non-chemical activities continue to be employed including suction harvesting along with hand pulling by professional divers and adopt-a-lake volunteers.  In late 2011 milfoil appeared again in dense beds in the north end of the lake.  Approximately 45 acres in the northern quadrant of the lake were treated in June 2012.  Please keep monitoring the lake area in front of your property and reporting your Adopt-A-Lake hours.  Our ongoing efforts are crucial to combating the re-emergence and spread of milfoil.

A graphic history of the lake’s milfoil treatment and current map prepared by Aquatic Control Technologies (ACT) is viewable here: LMorey2012Summary.
An annual summary is available in the current LMPA Spring Newsletter,found under the ABOUT tab.

As of June 8, 2017, the Vermont Legislature enacted new legislation regarding aquatic nuisance control. Act 67 adds
four animals to the species list of which transport is restricted, and requires boat operators to visually inspect
their own vessels and remove drain plugs while transporting a vessel.